1300 Years of History,
A Famous Temple,
Time-honored Tradition,
Beautiful in every season. 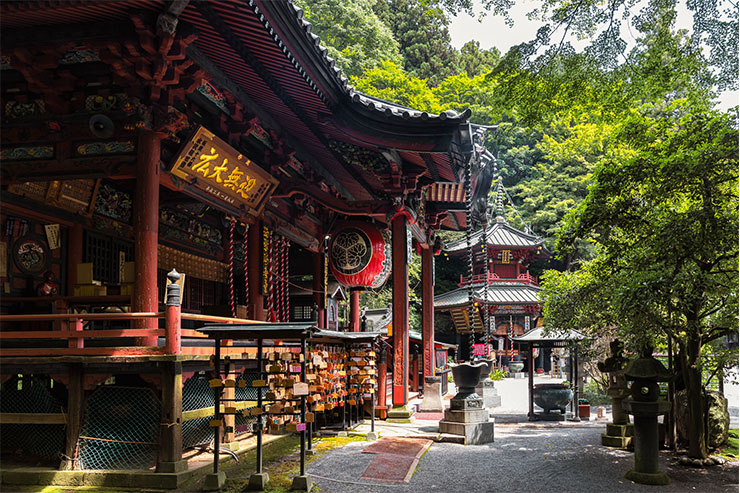 Mizusawa Kannon Temple was founded by Ekan, a high ranking monk from Goryeo, more than 1300 years ago in accordance with an order of Emperor Suiko and Emperor Jitoh. The name "Gotokuzan Mizusawadera" is from an imperial document handwritten by Emperor Suiko.

The precincts contain the Main Hall (Kannon Hall), a hexagonal two-storied pagoda (a prefectural designated important cultural property) enshrining the six good luck Jizo statues, the bell tower and the Shaka Hall. The Shaka Hall enshrines the statues of the Shaka Triad, a sitting statue of Amida Buddha by the monk Enku (a city designated important cultural property), the statue of eleven-headed Kanzeon Bosatsu and many more.

Main Hall (Kannon Hall) is at the center of the temple precincts and enshrines our principal Buddhist statue, Eleven-Headed Thousand-Armed Kanzeon Bosatsu. Eleven-Headed Thousand-Armed Kanzeon Bosatsu is known as the accommodating Kanzeon from ancient times. She offers aid and accommodates all wishes from living things. The building was completed in the middle of the Edo period (at a similar time to the hexagonal pagoda) and all sculptures have been carved out of the wood.

Rokkakudo, meaning a hexagonal pagoda, has copper batten seam roofing and was completed in the middle of the Edo period. This building is a fine expression of Japanese Jizo faith. It enshrines the statues of six Jizo guarding the 6 realms (hellish, ghost, animal, human, demi-god and heavenly) and represents the Buddhist wheel of life. These statues are sitting on a rotating pedestal. If you pray with all your heart while turning this pedestal 3 times to the left, your wishes will come true.

From ancient times, it has been said that Buddhas speak through temple bells. We express our appreciation for Mother Nature and pray for the countless Buddhas while listening to the bell in the morning and evening. You can join the ringing of the New Year’s Bell. Ring the bell, dismiss worldly desires, and welcome the new year.

The entrance path leads you to the Niomon Gate enshrining Nio, The Wind God and The Thunder God. This extremely colorful gate also enshrines the statues of the Shaka Triad in its second story.

The Mizuko Jizo is a guardian deity for the spirits of stillborn, miscarried or aborted children. Of course, parents wish their children’s spirits happiness and joy in heaven. However, it is said that these unfortunate children, who couldn’t achieve their destiny of birth and the ones who left this realm due to accidents or sickness, are bullied by demons at Children's Limbo, crying ‘I miss my dad. I miss my mum.’ The Mizuko Jizo is the one who protects those children in place of their parents. Our Mizuko Jizo statue shows children clinging to the Jizo, being protected by it.
Even only praying to the Jizo is a good, small memorial service for the children. We recommend you pray and entrust your message to the Jizo and hold a small memorial service for the children whose lives couldn’t be saved in this realm.
Gassho (Hands in a prayer position)